I blame methamphetamines for my Belly Dance career. Being raised in California, I did drugs for breakfast. Fast forward through years of experimentation, and I was ready for a healthier path for my body and my soul. One day in 1997 I picked up a Parks & Recreation booklet in Roseville, CA, (or as Steve 'O says Ros-EVIL-le) and I signed up for Beginning Belly Dance classes with Antara Nepa (aka Julia Carroll).

Julia Carroll, at that time, was a 45+ single mother of one. Julia had been belly dancing for 20+ years and was the director of The Ottoman Traders of Folsom, California. They were a Renaissance-based troupe that worked various Faires throughout California and parts of Nevada. Pretty much anything that Bal Anat or Hahbi'Ru didn't do, they did. Julia taught classes in both Folsom and Roseville at this time. The classes were based mostly in the Jamila Salimpour technique, although I don’t believe that Julia ever studied directly with Jamila. It was only later, while studying the Jamila Salimpour format, that I realized how closely she and Julia were related in style. One of Julia's favorites was Suzanna Del Vecchio of Colorado, and when I watch videos of Suzanna I can see Julia without a doubt! At the time my only references from Julia were Suzanna Del Vecchio and John Compton.

I studied with Julia for 3 years, joining her troupe in 1999. I danced with The Ottoman Traders at local Renaissance Faires, where I performed my first choreographies (by Julia), my first solos, and danced to live music for the first time in my life. We played the zills, drummed and chanted for each other on a regular basis. Our clothing was always "period," with woven fabrics, covered bellies and covered tattoos, elaborate head wear and authentic jewelry. The clothing was a challenge for me but with the help of Nancy Johnson (another Ottoman Traders dancer) I learned to sew! Funny, funny sewing stories... My favorite moments in the Ottomans were the times I spent with Nancy Johnson. 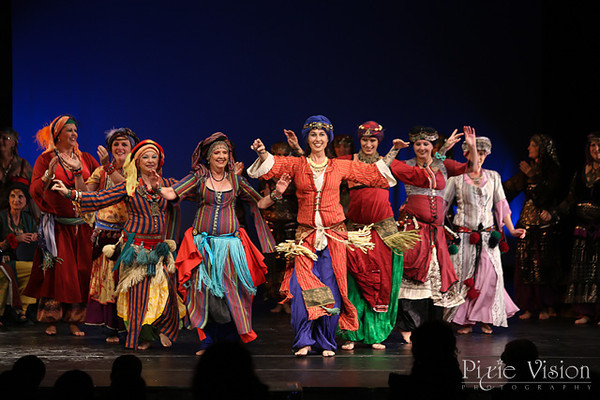 Amy, Julia and The Ottoman Traders

The Ottoman Traders did not perform any sort of Improvisational dance. It was all solos and group choreography, very much in the style of Bal Anat and Habhi'Ru, consisting of a 20-30 minute set with acting, live music and dancers. Julia was very good at the Faire and her show was always well thought out and definitely "period". My two daughters, Tangerine and Plum, would go to the faires with me when they were just babies.

I began teaching while I was performing with the Ottomans. Connie, one of the dancers, was letting go of her Beginning Belly dance class and looking for a teacher to take her place. It was at the Sacramento King's Cheerleaders studio, Carrie's Studio of Dance in Sacramento, CA. I spent about a year at that studio with my first 6 students, a sweet group of young 16 year old hippie girls from the river. As I progressed as a teacher I began to take on other classes in Placerville, (This is the first place Shelly and I started dancing together regularly) and in my garage in Citrus Heights, CA. During this time Julia and I came to a mutual agreement that I was growing in a different direction from the Ottoman Traders and it was best that I looked for the next step for me.

I love being on a team. I was practically born on a team; Dad's a pastor so I HAD to go to Sunday school and Mom's a choir director so yeah... I played on that team, too. I played sports with teams, ran relay races with teams, lived with a homeless community (aka ....a team), and so on and so on. So when I left the Ottoman Traders I was immediately looking for another team. I began dancing with my students at local events and started looking for group Belly Dance classes.

This is when I stumbled upon ATS®.

The first ATS® group I ever saw was Fat Chance Belly dance. I was completely intrigued and looked for the closest classes to me. The closest ATS® class was in Davis, CA (about 20 minutes from Sacramento) and was taught by Suzanne Dante, director of Invaders of the Heart. I only took maybe 4 classes from her before I met another group located in Sacramento, CA named Anahata. Anahata was a shoot off from Invaders of the Heart, Patrice Norris was the director. They did not teach regular classes in Sacramento but rehearsed and performed together regularly. Patrice offered me a position in the troupe with training while we went along. I accepted gladly and was excited to go from a performing troupe directly to another performing troupe while having the opportunity to learn ATS®. I danced and studied with Anahata for only 6 months. It was a short and quick exposure to ATS® but I was interested in pursuing it more.

Here's where I met Shawna Rai. Shawna had danced with Invaders of the Heart and Anahata, and when I met her she was dancing with Ultra Gypsy. She was not teaching classes at the time, but I was teaching in a few different locations. She came to a couple of my classes and we struck up a friendship. Soon after meeting each other, Shawna left Ultra Gypsy and we established Haruspicy Dancecraft, (2000-2004) a collaboration. Haruspicy was an ATS® and Indian Fusion duet. We began studying Bharata Natyam and Hula together on a regular basis. Shawna was really the one who cleaned up my Improvisation. She had more ATS® experience then me at the time and was able to solidify a few more details. She took out unnecessary stepping and made sure that my levels were cleaner and more technical. We danced together for 4 years, performing (collaborated) choreography and ATS®. 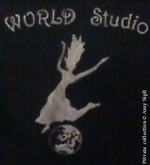 I opened my first dance studio in 2002 under the name WORLD (Womb of Real Life Dance) Studio. When I opened the doors we had classes in Belly Dance Fusion (Teacher, Amy Sigil), ATS® (Teacher, Shawna Rai), Hula (Teacher, Tyra Simoni), Hand Drumming and African. The studio was open for 2 years, from 2002 to 2004. During that time Shawna Rai was our full time ATS® teacher and I taught Fusion choreography. About half way through 2004 Shawna decided to leave the studio, her classes, and Haruspicy. Here's where the course of Improvisation changed forever. I had been studying and performing ATS® for about 5 years, but I didn’t feel like I could teach it with any kind of justice. I told the grrls and bois at the studio that unfortunately we would not be offering ATS® any longer. They totally freaked out and were like..."um. NO." I explained that I just couldn't teach something that wasn't authentic to me. I loved ATS® but it wasn't my "style" of teaching or movement. So Shelly said, "Well then, make it your own and teach us Improv."

At this time UNMATA was my student troupe out of WORLD Studio. Like I said, I love being on a team. UNMATA was the first group of girls I looked to ... and so I decided yep....I'm joining UNMATA and we need to up our game! UNMATA had a different brand then Haruspicy Dancecraft- much sportier- so I decided to begin reworking the ATS® vocabulary so that it would fit our style. That way I would know what I was teaching, if I was going to start teaching Improvisation.

I settled on naming the vocabulary Improvisational Tribal Style (ITS), and for the next 7 years I re-worked our new ITS vocabulary without formatting it. I wanted to stay close to Tribal Style in name but also felt like the best part of this concept was the improvisation, and that should be stated in the title. After some time, we started to attract some interest in ITS from outside of UNMATA and Hot Pot Studios. So finally I decided to bite the bullet and format the vocabulary. Rule by Rule. Right and Wrong.

We now have certification programs offered numerous times through the year, and we have certified teachers all over the World.

ITS represents over a decade of Artistic process and experimentation for me. It is its’ own animal. A breathing, feral, unpredictable beast that I will continue to hand feed until it turns around and kills me. 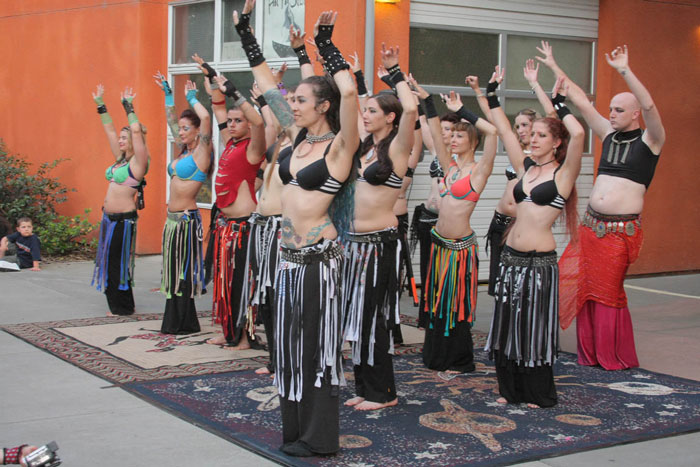