ITS is a combination-based form of improvisational dance created by Amy Sigil.

This energetic dance is all about teamwork, having fun and being actively engaged in the moment. 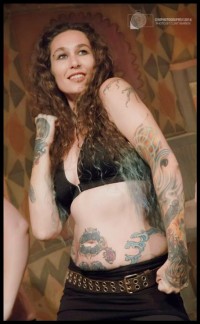 ITS relies on a shared vocabulary of movements, each initiated by a distinct cue movement. The leader initiates the cue movement, then a short, choreographed combination, or combo, is performed. These combos can be done in any order, and none of the dancers know ahead of time which movements the leader will cue next.

In order for ITS to work, everyone must know the same vocabulary of movements. Because of this, ITS is a lot like a language. Like any language, vocabulary and grammar are the tools that you will use to be able to communicate. American Tribal Style (ATS®), created by Carolena Nericcio in the 1980’s, is the root language of ITS. This dialect of ATS®, could be compared to a ‘romance’ language of Latin (ex: Italian, Spanish, Portuguese, French). It’s important to understand the roots of language in order to speak your modern tongue fluently.

When you learn a new language, it takes a long time to build a vocabulary to effectively communicate what you want to say. Grammar isn’t the most exciting part of learning a language, but it’s one of the most important tools. Without it, the meaning of what you’re trying to say can easily get lost or misconstrued. You want to be able to say something the same way every time, so your meaning is absolutely clear. Be considerate, be consistent. So while the rules may read like stereo instructions, they are really, really useful!

Trust us, it’s worth the work. When everything comes together just right, there can be a perfect conflagration of musical interpretation, wordless communication and physical unity that creates a magical experience for both the audience and the performers. Of course sometimes it doesn’t happen this way- mistakes are part of ITS, and can even lead to some pretty unforgettable moments (the good and the bad kind!). It also allows you to have an incredible amount of freedom while still dancing in a troupe situation. Maybe you've never heard the music before. Maybe you've never danced with the other people in the Formation before. They may not even speak the same language as you. If you all know the ITS vocabulary, you can look like a polished, choreographed troupe.